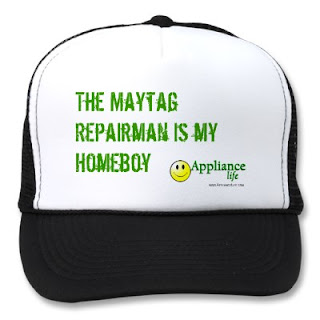 I need a "homeboy repairman"!! Went to run the dishwasher this morning & I couldn't get the door to close. I tried everything I could think of but finally gave up & called the hotline thinking that I had the child lock on or something. After spending 20 mins pressing buttons I finally got to talk to a ! Another 20 minutes before this so-called decided the latch was broken!. I explained the dishwasher was just about a year old & probably had been run a total of maybe 75 times!!!!!!! I was given a choice & 3 repair places to call along with an authorization number to get it fixed. I tried calling & not one of them answered the phone. At that point I pulled out my receipt which was dated Feb 21st, 2008 - more than a year - I called the store I bought it from. A very understanding sales person said he understood & gave me the number of their repair service. This phone call did not go as well as the person on the other end informed me:
1. They would not be able to come out until Tues!
2. It would be $69.99 for the service call, $35.00/30 mins for labor plus parts!
I'm sure I don't have to explain that at that point I had a "hissy" fit & was told if I hadn't have called the hotline they might have been able to work with me! Guess what they are not working with me!!!!
I went back to the hotline & after another 20 mins to get to a & 20 mins more of explaining that it was ridiculous that it wouldn't be covered under warranty.......... the average family would have used that dishwasher around 375 times!!! I ended up with another special authorization code but still had to find someone to fix it. I finally had one of the repair places answer the phone but still can't get anyone here until Tues!