February 24, 2010
Of course with our bodies in a different time zone we were wide awake early.....like 3:00AM but I said I was not going to get in the car until 7:00am! I wanted to at least have daylight to drive the rest of the way. I managed to hold Popster back until 6:45AM & we were on our way. It was a light rain & the roads were wet but clear. The closer we got to Albany there was more snow on the roads & eventually the rain turned to snow. 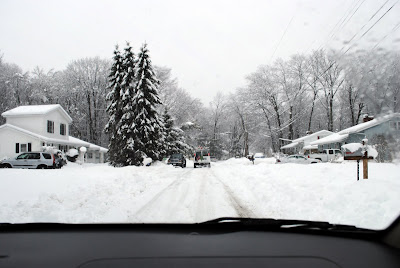 At the intersection halfway down was a big pile of snow & the rest of the street wasn't plowed.......clue # 2! 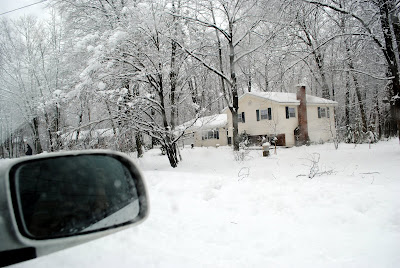 My neighbor's car was in front of him stopped on the street in front of our house.....clue # 3! 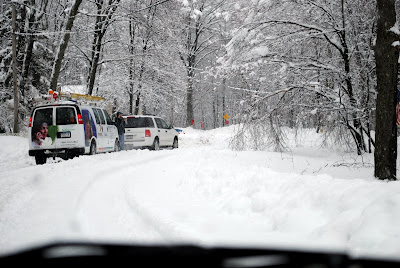 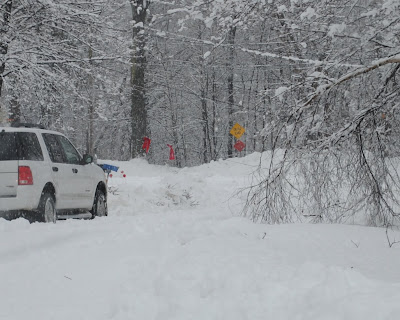 Next piece of bad news......the power was off & had been since 1:00AM. We had left in such a hurry without a complete set of house keys. We figured we would just use the keypad to open the garage door.......not without power! Oh yes we were locked out!!!!!! Who knew when the power would come back on........it happens around here all the time!
They fixed the wires & then Scott showed up so he plowed enough of the driveway for us to get in.
We decided to go to the kennel to pick up Miss Molly. She acted very lukewarm towards us & sat all the way at back of the car with her back to us. We stopped on the way home to borrow a phone book to get the number of a locksmith. Poor Molly had thrown up all over the back of the car. At least when we got home she was acting more like herself & went crazy running around her yard in the snow! 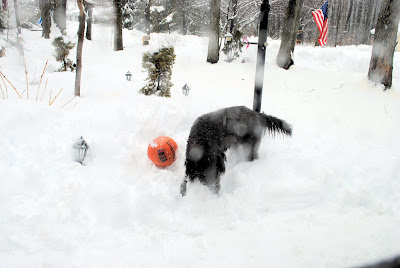 Poster had promised the guy a big tip if he came right away so we only waited 15 mins & he was there. He was able to pick the lock to the back door to the garage & $100.00 later we were inside! Our heat had been turned down really low so the house was about 50 degrees! Popster went out & started on the driveway & I put on an extra sweater & started unpacking! The power came on at 1:00PM so it was soon warm again.
We are supposed to get more snow tomorrow & Friday..........lets hope not!